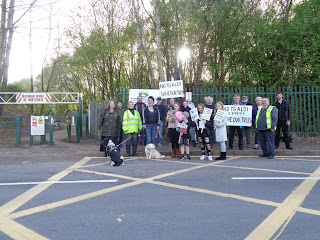 The Birmingham City Councils Planning Committee at a meeting yester day  again made it clear they did not agree with the Aldi Planning application for the Old Horns site.
Far to may trees including protected ones would be removed under the current Aldi Plans.
They will be fighting the plan at the appeal Aldi have called for which will be heard by the Government own officers.

Many suggested Aldi consider other near by sites or even the Kingstanding shopping precinct.

Other issues of concern, were problems with parking, the added traffic congestions  the proposals would bring, to  the size of the development and the effect of development on the wild life and the Nature Reserve.
Councillor Barbara Dring and I ( I am the Chair of the FQNR) were there to make sure as usual the voices of our fellow Oscott residents were heard.

I am personally still saddend by Aldi not wishing to sit around a table and compromise. Perhaps a smaller more suitable size store with a lot less tree reduction and some better transport measures?
Posted by Keith Linnecor at 06:10