Litter bins are meant for litter which residents are carrying with them when walking on the street not for general household waste.

A number of bins in the Oscott area are having bottles and other rubbish( INCLUDING BULK ITEMS)  which should go in residents normal wheelie bins ( OR TAKEN TO THE RECYCLING CENTRE) dumped in litter bins leaving little space for their correct use.
Some resident are piling their house hold rubbish into litter bins or at the side of bins this needs to stop as constant abuse like this may lead to the bins being removed which is unfair to those who use the bins with common sense.
Dumping at the side of a litter bin is fly tipping and anyone caught can expect a heavy fine. 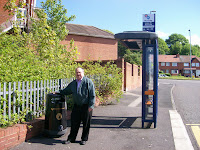