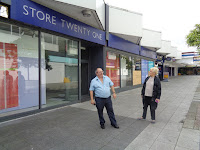 
I have asked the Councils Development Planning Manager for the North West of Birmingham, to investigate this matter and to make contact with the Precincts owners so we can understand the issues and their intentions for the site.

As Local residents  as well as being  Oscott Councillors  who use this site  Barbara and I will await their response with interest as we have more than a simple passing interest. We have the long term future to think of too.