UP DATE ON POLICE CHANGES IN OSCOTT 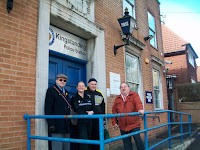 At a meeting of the Oscott Police Neighbourhood Tasking Group (NTG) yesterday Local Community Group Leaders were informed that, residents should not notice any real difference when it comes to Policing in the Oscott Ward following the Local Police Team now having to use the Handsworth Police station to log on duty.

The Local Oscott Team will travel to the Oscott Ward to do their usual neighbourhood Policing Role.

*The Local Police team will continue to meet with Local Community Representatives and other agencies at the Kingstanding Police station on a monthly basis.(at the NTG meetings)

* The Local Police Team will continue to attend Oscott the Ward Advisory Board and Ward Committee meetings,

* The Local Police Team will continue to assist the Oscott Community Speed Watch.

The Kingstanding Police Station back offices will continue to be used for the foreseeable future. Sadly the station will not reopen for public use. ( sadly this is already the case)

Members of the committee were assured that the Oscott Neighbourhood team would in fact be given more choice in the vehicles they can use and will have the added advantage of being able to work more closely with other near by units.

The huge amounts of cuts over the last few years in the Police funding from Central government (which has forced a number of changes and fewer officers) seems to be much more worrying.

I have asked that the changes be monitored carefully.
Posted by Keith Linnecor at 04:57