I spent an interesting few hours at the 610 Community Centre attending the Late, Late Youth club meeting.
I was asked to attend to inform residents what was happening in the area and to hold a question and answer session.
I hope that the Q and A was useful and I certainly know their were dozens of questions to answer.
I also hope a lot of the deliberate misunderstandings being but about were squashed at this meeting.

All the member seem really to enjoy heir morning socialising with each other and the organizers do a good job.

Just some of the questions were about what is happening to the School Crossing patrols, the Local Libarys, the swimming baths, wheelie bins, parking, Aldi, Council tax, why the Government hate Birmingham, and tree pruning and many more. 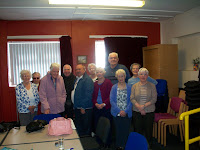 Posted by Keith Linnecor at 17:08 No comments: 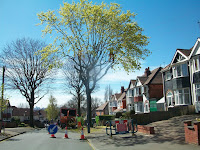 I am still trying to get more of the large trees in Oscott either more heavily pruned or replaced and I will continue to do so whether there is an election on or not.

I have with the help of the Perry Barr MP been lobbying the Relevant Government department to look again at the tree pruning standards they impose on Councils..

I have with my fellow Ward Councillors help organized meetings where tree issues have been discussed and as a result some extra trees are being removed but not enough .
More are planned latter this year.

I shall to complain about this issue to Amey Highways and the Council and will certainly not be dropping the subject as soon as the elections are over.

I certainly cannot promise to get every tree that is causing a problem removed or pruned but  I  will try and help where I can.
Posted by Keith Linnecor at 08:24 No comments: 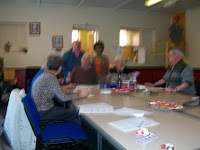 The Oscott Elderly Resident Group have re elected Maureen Byrne at their AGM meeting last Wednesday.
Maureen has worked very hard to create an excellent atmosphere at their meetings on the Third Wednesday in the Month. (They meet at the 610 Community Centre.)

It was good to see Councillor Tristan Chatffield at the meeting helping to field questions to the local residents.

They are looking for new members and if you are over 55 and would like to get out of the house and meet other residents at these meeting please ring 675 2349
Posted by Keith Linnecor at 12:10 No comments:

NIGEL QUINN RE ELECTED AS CHAIR OF THE OSCOTT RESIDENTS ASSOCIATION 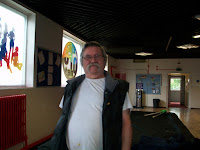 Congratulations to Nigel Quinn on his re election as the chair of the Oscott Residents Association.
At the ORA AGM earlier this week Nigel received the backing of all those present.

Nigel is known for his persistent lobbying of local councillors and Council officials on his members behalf
Posted by Keith Linnecor at 08:39 No comments:

MY NEXT COUNCILLORS SURGERY

I would like to remind Oscott resident that my next Councillors surgery will be on Tuesday 26th April at the 610 Community Centre, Kingstanding Road. at 9.30am.

If you cannot make this meeting please either ring 303 2039 (messages) or Email me on Keith.Linnecor@Birmingham.gov.uk if you would like to inform me of any concerns you have
Posted by Keith Linnecor at 18:50 No comments:

NO SYMPATHY IN OSCOTT FOR FLY TIPPERS AS TOUGHER FINES ARE ANNOUNCED. 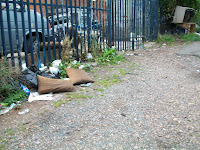 There is  no excuse for fly tipping in the Oscott area as the Holford Drive waste disposal site (a few minutes down the Aldridge Road) still takes rubbish free of charge and larger collection cost £25 to be collected.
There are also more litter bins around then ever and recycling banks are in a number of locations including the ASDA care park.
A lot of the fly tipping in fairness does seem to be done by out side the area (coming in and just dumping rubbish in secluded spots. This may have got worse since Booths lane their old haunt has been for the most part sealed off.
With this in mind it is important to lock any access way gates if you have them. As you can see from the information below there is now a tougher on the spot penalty and if you see any fly tipping please take a note of any details registration number and so on and report it to the Council.
Like the Chair of the Licensing Committee Oscott Councillor Barbara Dring fly tippers will get no sympathy from me if caught

Birmingham City Council’s Licensing and Public Protection Committee has today (20/04) agreed to impose the maximum level allowed under new powers granted to local authorities under the Unauthorised Deposit of Waste (Fixed Penalties) Regulations 2016.
The fixed penalty notices are designed to reduce the burden of taking a smaller scale matter to court.
Jacqui Kennedy, Acting Strategic Director for Place at Birmingham City Council, said: “We all have a responsibility to ensure we dispose of our waste appropriately. In Birmingham, we take a zero tolerance approach to fly-tipping, which blights communities, takes up valuable resources and places a financial burden on the taxpayer.
“These new fixed penalty notices will enable us to target offenders without the need to take certain cases to court, while also sending out a clear message that such inconsiderate behaviour will not be tolerated in our city. We will not hesitate to take action against those who believe they are above the law, including pursuing prosecution where necessary and where there is compelling evidence.”
Penalty notices will be payable within 14 days of issue. Failure to pay will result in prosecution for the original offence. Serious cases will continue to be prosecuted.
The committee decided against introducing a reduced penalty for early repayment.
Posted by Keith Linnecor at 03:10 No comments:

As the Transport Delivery Group ( Centro) champion for the 997 bus route I often use it to see what issues there may be. I would welcome comments from other users. I am in regular touch with the route manager and pass on any concerns.

I was please when the 997 route was converted to use platinum style buses as these are so much better than any others. They have wi fi, wider leg room, modern pollution free engines  and stop announcements for example.
Ever since I managed to persuade  NX many years ago to introduce the limited stop direct to city centre route in place of the old wondering 46 route I have been asking for better quality buses and since lat year we have them. If only we could sort out the ongoing pinch point problems!
Posted by Keith Linnecor at 07:40 No comments:

The Oscott Residents Association and the Oscott Elderly Residents Group will be holding their AGM's today at the 610 Community Centre.
Their meeting will start at 11am if you would like to go along.
Both groups are full of voluteers who try and help the local community and they need your support.
I will be attending both meetings to show my support for the work they do.

For any further information regarding these of any other Oscott Communty Groups please ring 675 2349
Posted by Keith Linnecor at 07:28 No comments:

DOG FOULING IN OSCOTT IS STILL A PROBLEM 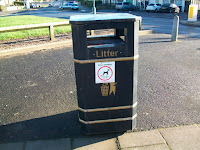 I am still receiving a number of complaints from Oscott residents about dog fouling which is a great shame.
Dog mess is a real problem and sadly often creates friction with good dog owners( lovers)  who care about their pets and some residents who falsely blame them for the problem.
This is another reason why trying to get all dog owners to bin and bag (or take home their dogs mess)  is important.

Its a hard task to reach the small minority of dog owners who do not clean up their dogs mess.
There are more litter bins then ever in the Oscott area including litter bins on the Queslett nature Reserve  and there are plenty of warning stickers on lampposts so the excuses for not removing dog mess are extremely small.

I am continuing to ask the dog Wardens to do what they can but they have to cover a large area across the city. The fine for allowing a dog to foul in a public area without picking up has gone up.

If you know of a hot spot for dog mess please email me Keith.Linnecor@Birmingham.gov.uk
Posted by Keith Linnecor at 06:52 No comments:

89 BUS REMEMBER USE IT OR LOSE IT

I would like to remind Oscott residents who use the 89 bus route to use it as much as possible. This route needs to be used or it could be a case of use it or lose it.

With the help of local residents I fought to keep this route and although it may not run as often as people want it does the job in most cases by connecting residents with the Kingstanding Circle and Erdington.

This bus is a life line for many Oscott elderly residents particularly those living near Old Oscott Hill. The 89 bus is subsidized and needs the support of local residents. 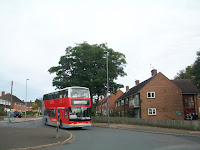 Posted by Keith Linnecor at 21:32 No comments: