MORE NEEDS TO BE DONE FOR WILD LIFE AND THE ENVIRONMENT

Its a slow hard going process but as a member of the BCC Planning Committee I am still trying to have a sub committee set up which looks at the Environmental/ Wildlife issues as related to the Planning process. Some councilors are coming around to the idea.
For years there have been committees looking at heritage and conservation issues its time for the environment to be considered more. Its time we look at the now and the future.

Many wild creatures are being effected by Planning applications hedgehogs for example. We need to do much more to safe guard wild creatures and this in turn will have a knock on effect which will mean people will have a better environment to live in too.

We urgently need new house but we must also protected those who are to live in them and near by
But we must  protect the environment and wild life as much as possible at the same time.

Posted by Keith Linnecor at 13:25 No comments:

Sadly far too many of the roads in Oscott which have been resurfaced or repaired have been left in a condition where standing water puddles occur following often even light rain.

Resurfaced road need to be checked off better on completion to ensure hollows/ dips are not left in the pavement which will result in free standing water.

I am concerned that not only can this lead to minor frustrations like muddy shoes but come a hard winter these puddles will become icy which could result in slips, falls and injury.

I have contacted Amey Highways and the BCC Cabinet member for Transportation asking them to consider the matter.

I AM HOWEVER STILL PUSHING FOR MORE OF THE PAVEMENTS AND CARRIAGEWAYS IN OSCOTT TO BE RESURFACED OR PROPERLY REPAIRED.
Posted by Keith Linnecor at 05:47 No comments:

Please do not forget to leave your contact details (address) and the exact location of the faulty street light.
Posted by Keith Linnecor at 07:13 No comments:

OSCOTT LABOUR PARTY WORKING FOR YOU

As a member of the Oscott Labour Party Team as well as a Local Councillor for Oscott I am always trying to help Oscott residents where I can.

The Team is active all year around and welcome your views and concerns.

The Oscott Labour party is always on the look out for new members- if you would like to join or know more about what the Oscott Labour Councillors and Team members do please contact me on.

THE NEXT PERRY BARR M.P SURGERY

I have been asked to remind Oscott residents that Khalid Mahmood the MP for the area holds his next surgery on October First (Sat) at 10.30am. The venue will be the 610 Community Centre Kingstanding Road.

If you have any concerns regarding the NHS, Job Centre's and others please pop in and have a chat with him or his team.
Posted by Keith Linnecor at 16:29 No comments: 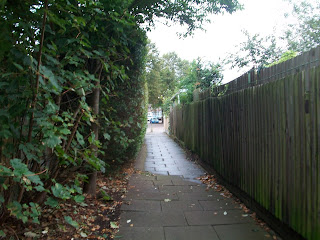 I am pleased to be able to say I have managed to get Amey Highways to cut back the vegetation in the Elliston Avenue to Meadthorpe Road Right of way.
Posted by Keith Linnecor at 14:45 No comments: 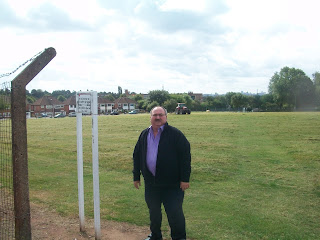 The latest information regarding the grass cutting of the Glenmead Playing field is that they have confirmed to me today that they are having to get some equipment in on Wednesday which will cut the long grass and work will start weather permitting on Wednesday.

I am please at last some more concrete news has been supplied and this amazing frustrating situation is nearly resolved. The markings will be added when the grass has been cut.


Councillor Dring is with the support of Councillor Chatfield and myself are  continuing to look into the village green proposals for the long term
Posted by Keith Linnecor at 10:22 No comments:

ZERO HOUR CONTRACTS ARE STILL A PROBLEM FOR SOME IN OSCOTT

The rise of zero hours contracts in the workplace is the latest attack on workers’ rights and dignity. Put simply, zero hours contracts cover a range of arrangements that mean workers have no guaranteed weekly hours or income, and are only being paid for the hours that they do work. Unite wants to challenge employers to end the exploitation.

Employers use zero hours contracts to cut wages, avoid holiday pay, pensions, and other benefits enjoyed by employees and agency staff. Workers are also unable to take on other work, as they are obliged to be available for work at the whim of the employer. And with the high level of insecurity comes the risk of bullying, harassment and stress. It’s time to end the exploitation. - See more at: http://www.unitetheunion.org/campaigning/saynotozerohourscontracts/#sthash.Jp0H1MXF.dpuf
The rise of zero hours contracts in the workplace is the latest attack on workers’ rights and dignity. Put simply, zero hours contracts cover a range of arrangements that mean workers have no guaranteed weekly hours or income, and are only being paid for the hours that they do work. Unite wants to challenge employers to end the exploitation.

Employers use zero hours contracts to cut wages, avoid holiday pay, pensions, and other benefits enjoyed by employees and agency staff. Workers are also unable to take on other work, as they are obliged to be available for work at the whim of the employer. And with the high level of insecurity comes the risk of bullying, harassment and stress. It’s time to end the exploitation. - See more at: http://www.unitetheunion.org/campaigning/saynotozerohourscontracts/#sthash.Jp0H1MXF.dpuf


Sadly I am still having residents complain to me about Zero Hour Contracts. These contracts can in many cases destroy the dignity of those often forced to accept them.

The offer little job security and very poor if any holiday entitlements.
I have had residents more or less forced to take them and they have often had to travel no little distance to take up the work which are often poorly paid.

To find out more about this issue get in touch with the GMB or other unions who can give you advice.
Posted by Keith Linnecor at 23:28 No comments:

ITS ALWAYS NICE TO MEET THE RESIDENTS IN SERVITE HOUSE 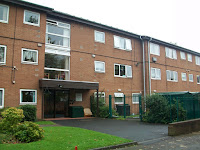 It was pleasing to meet up with reside ts at Servite House during my roving sugery. The views if residents living in complexes for the elderly should never be forgotten.

I have cut back some of the encroaching  brambles in the near by right of way as it was quicker to do that than call in those responsible. Hopefully it can now be used with being scratched.
Posted by Keith Linnecor at 07:04 No comments:

A CHINK OF LIGHT IN THE BATTLE TO GET THE GLENMEAD PLAYING FIELD BACK IN USE. 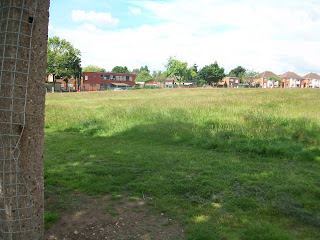 The Landscape Practice officer who is dealing with the approval required for  funding to be allocated for the Glenmead scheme has advised me this has now been obtained and a code has been allocated. (a job number?)


The Local Parks Manager will now instruct the contractor to undertake the required works and will advise us when they are due to commence and the when the track will be available for use.


I have asked the Officer responsible for the field to liaise with a well known local team as there is a possibility the playing field will be  hired out for football.
I have asked  that it be arranged for the proposed running track to be laid out  in such  a way that if an adult football pitch and 1 mini soccer pitch are required there is sufficient space to do so without affecting the track.


I would like to assure all concerned residents that all 3 Oscott Councillors Councillor Barbara Dring, Tristan Chatfield as well as myself are doing what we can to get this frustration situation dealt with as soon as possible,

Posted by Keith Linnecor at 17:41 No comments:

One of the main aims of the Friends of the Queslett Nature Reserve has been to improve the wild life habitat in the reserve.
Over the years be have put up new bat, owl and bird boxes ( we will be doing so again) as well as planting new trees and helping to manage old ones. We have also helped improve the by planting wild life friend plants.
Our next project thanks to sponsorship found mainly by our chief fund raiser Brenda is to create a wet land feature to improve the habit for amphibians on the site. 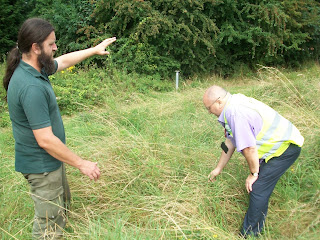 The first stage of this is to identify a self sustaining water feature (or bog). I have been out with park rangers recently  looking for suitable site which is not easy in such a dry area,
Posted by Keith Linnecor at 06:17 No comments:

MY NEXT COUNCILLORS SURGERY 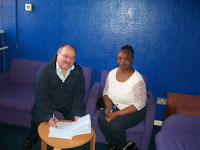 If you cannot get there you can always leave me a message on 303 2039, Email me Keith.Linnecor@Birmingham.gov.uk or write to me care of The Birmingham City Council, The Council House, Birmingham B1 1BB.

For those with a genuine mobility problem I am always happy to carry out a home visit.
Posted by Keith Linnecor at 05:58 No comments:

I have finally managed to get some sort of time scale for new street lighting for Warrenhill Road from Amey Highways. They have now agreed the work will be done as part of their 2017 - 2018 works program.
Posted by Keith Linnecor at 05:33 No comments:

THE GOVERNMENTS BOUNDARY COMMISION FOR ENGLAND ANNOUNCES ITS PLANS FOR OSCOTT


The Governments Boundary Commission for England have now come up with their finale drawing of the map for Oscott re the 2018 local elections.

While I am aware that 2 thirds of the electorate may not be too worried as they do not vote at any local elections I am concerned about what the Governments Commission have decided to do.

I have always be cynical when it came to their objectives but I will keep my concerns on here to the Oscott Ward. My own view was there was never any need to alter Oscott clearly others may have different views however.!

They have decided to dismember the Oscott ward regardless of any community ties there may be, simply to get the numbers of residents ( numbers of) to fit the commissions artificial targets.
They have shown no interest in the residents of Oscott as far as I can tell.?

In the simplest of terms they have added the South side of the Oscott Ward to the KIngstanding ward for the first time.

Sadly however they have added through the use presumably of someone who seems to have received a biro as a gift,  little zig zags in the boundary. This applies for  example and for some unknown reason to Marshall Grove and Blenheim Way.

There may be some who welcome these changes but I simply do not see the point as someone who has lived and represented this area for some years.
Certainly one of the excuses made for the change it the boundary which was,  it should allow closer links between Councillors and residents will not be the case given Councillors across the city in many cases will now have to represent even more residents and the population of Birmingham and Oscott is growing..

Any way the decision is now made and the Government across the city and now  has had its way.!

I would however like to assure all the residents in the current Oscott Ward I will continue without making any promises, to do what I can to help them with any issues or concerns they have and to try and improve the Oscott area despite the horrendous cuts in council funding
Posted by Keith Linnecor at 05:28 No comments: