MORE FLY TIPPING IN OSCOTT IT HAS TO BE STOPPED. 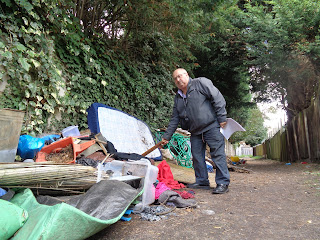 There has been more disgusting fly tipping in the Oscott area.
This time a lorry load of rubbish including bedding has been dumped in the public ( but privately owned right of way between Templeton Road and Old Oscott Hill.
Scores of young child with their parents will now have to walk past this rubbish on their way to school.

I hope anyone who may have seen anything will report it to the Council and if proved who ever did it should be heavily named and shamed or if it is a second office put in prison.
There is no excuse a further 5 minute drive would have taken them to the Holford Drive Salvage department.
Posted by Keith Linnecor at 13:19