THE LITTER IN OSCOTT MUST BE REDUCED 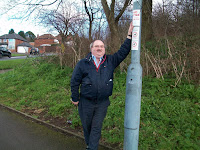 It was disappointing to read in a recent survey that the litter in Oscott ward was above the target set for the city. Although it was much better than the neighbouring Kingstanding and Perry Barr Wards, this is not good enough. Our standards must not be allowed to slip.


With this in mind I have been reminding the street cleaning management for the area they must do better and for example ensure some of the missing litter bins I have reported are replaced.

Amey Highways should also automatically replace any bins they remove to do work.

There are higher fixed penalties for litter droppers and I would like to see these enforced more often to.

With litter in mind I would like to thank again those who join me on Grot spot patrols where we pick up litter and also the Friends of the Queslett Nature Reserve for the work they do,

I will be asking the street cleaning department to look again at their efforts and hope residents will take more pride in the area and bin their litter more.