NEW NURSING HOME MAY NOT BE BUILT? 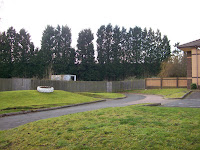 As I understand it there may not be a new Old Peoples Nursing home built on the Aldridge, next to the existing empty one called the Valley Nursing home.
It now looks as if the application was meant more to increase the cost of the building land than any thing else?
I would not be in favour of a nursing home being built so close to the near by Motor way and the busy Boars Head Junction. I think the junction is very busy at peak times and the fumes from cars using the junction and the motor way would not be good for elderly residents.
Also my colleague Councillor Barbara Dring has been looking very closely into the reasons for the Valley nursing home, which is owned by the owners of the land, where planning permission was granted and also the opener's of the Valley Nursing home next door which had to close.
Posted by Keith Linnecor at 06:08