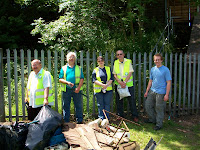 Due to the hard work and efforts of members of the Friends of the Queslett Nature Reserve (including the Aldridge Recreation Ground) Birmingham City Council Leisure Service officials have asked that the FOQNR take on a similar role for the Perry Beeches Nature Reserve. ( this located on the land next to the motorway at the end of Bowman Road.)
In response a small team of activists have with volunteers from other groups yesterday had a mass litter pick of the site. Some paths have also been pruned back and cleared.
Over 30 black bags of waste, old chairs, tables, wood and other objects were removed from the site.