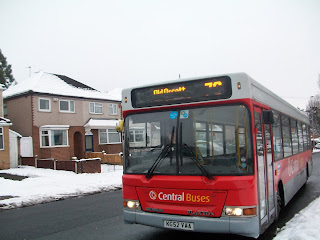 The 76 bus route is to be withdrawn by the Private company operating it.
However following discussion with Centro who have been dealing with the company I can announce there will be some cover for the route. The 88 will now divert on an hourly basis along Kingstading Road, Part of Dyas Toad and Old Oscott Lane before traveling to the Kingstanding Circle via Old Oscott Hill.

The 934 will take in part of the route extending from the Pheasey to Walsall on an half hour basis.

These and a number of other bus route changes are part of a wider review and NX and Centro are holding discussions with bus users in a number of locations including at the Mecca Bingo Hall at Kingstanding Circle on June 5th from 1pm until 6pm
Posted by Keith Linnecor at 16:12