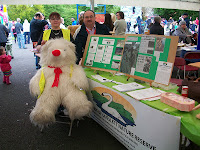 There was an excellent turn out at the Kingstanding Fun day held at the Wheldon Rec today.
Well done to the organisers, all those who had stalls and so on.
The wall climbing, and Falconry displays were very popular although it must be said no one has seen Kingstanding Councillor Peter Kane since the birds of prey were put on displays.

There were a number of stalls which seemed to do well including the Queslett Nature Reserves and their volunteers, Brena, John, Bob and Brian. It was also good to see the Local Police Team there.
Finally well done to the DJ who as ever did a great job.
Posted by Keith Linnecor at 13:12