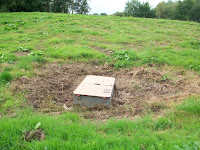 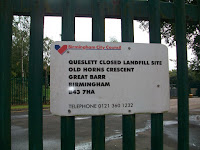 The Queslett Closed land fill site (next to the ASDA Super store off Old Horns Crescent,) look to all the world like a peaceful green oasis in the ever developing urban North Birmingham.

The green wooded spaces and grass land which can be seen from distant heights can however be very miss leading. This site is potential dangerous for those who insist of trespassing onto it.
The land is highly contaminated with gases such as methane which have developed as a result of the burning off land fill household waste for many years.
A regular check is made on the level of gas by a very dedicated staff who work around the clock on the site. The site is criss crossed with underground pipes and vents which need monitoring.

Not only do these staff monitor the gas they also maintain the site creating important wind brakes in case of fire, but they also have to act as a deterrent to would be trespassers and vandals.

The site will not be opened to the public for decades due to the amount and type of gas found under ground with the site. This gas can be inflammable and highly toxic.

Sadly some are intent on getting into the site even using grinders to cut through the fences.These people need to know they are putting their lives and other in danger. I have asked the Police to be a vigilant as possible and would ask local residents and users of the near by reserve to inform the Police of anyone seen breaking into this site.
The message to all is keep out.

The neighbouring Queslett Nature reserve is safe to go on as only tiny traces of gas remain but the site is still checked regularly for safety reasons.
Posted by Keith Linnecor at 20:11