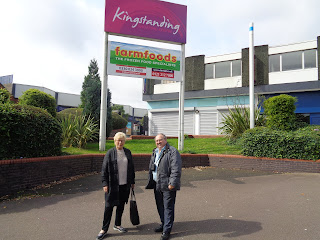 The governments Austerity measures and policies are really effecting Oscott residents. Sadly some of their politicians appear to be in self denial and think every thing is rosy?

Just look at the run down state of the Kingstanding shopping area for example.
Resident are having to use larger shops further afield as in many cases due to the completion and the fact residents have less money in their pockets. They could afford in may cases to use the smaller shops in the precinct and this has not helped.

Luckily the Post Office is still there and shops like Farm Food and Greiggs are holding on.

Given many residents are really feeling the Governments cuts it is no surprise that Charity shops are slowly taking over the units in the area.

Councillor Barbara Dring and I are doing what we can to help ( I have been asking the Economic development section if they can help) but until the Government realise the damage they are causing with their cuts to Local Councils and suppressing residents pay and so on it will be a big job to see any major improvements.

We will carrying on try to help and would urge residents to use those shops that are still in the precinct.