CONCERNS ABOUT THE NHS EXPRESSED AT KINGSTANDING PENSIONERS CONVENTION MEETING 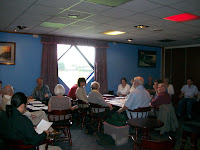 I was pleased to be asked to attend a meeting of the Kingstanding Pensioners Convention today.
I went along with Councillor Barbara Dring to listen to the concerns of a number of pensioners in the area. There main concerns were about whether the free bus pass will be retained, why some people are attacking the NHS and the need for a new bus shelter on the college road,

I was able to assure member of the KPC that the bus pass is safe in the hands of the current government, many of those attacking the NHS were just giving their own political view (hopefully not shared by mainy of their political allies?) on the subject. Most agreed our NHS is vital to the elderly and it should not be got rid of after the next general elections. I am also working with the KPC Chair, to try and resolve the bus shelter issue. I had to admit however, Kingstanding residents and Councillors are opposed to the idea.
Councillor Barbara Dring answered a number of questions about Social Services and health commissioning. Khalid mahmood MP sent a representative (Tristan) to feed back to him as he (KM) was in London..
As ever it was an enjoyable meeting well chaired by Les phillips with the help of Ken Smith.
Posted by Keith Linnecor at 12:49

Great blog
Keep it up.