STILL NO ACTION IN KETTLEHOUSE ROAD 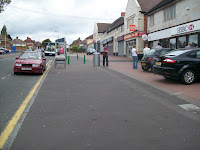 Some months ago now at a site meeting in Kettlehouse Road with residents and council officers, it was shown how dangerous the pavement in Kettlehouse Road can be near the HSB ATM. While we were there drivers were "bouncing up the curb narrowly missing pedestrians, to get as close to the bank as possible. This is amassing given there is a free car park with a few yards of the bank.
Transportation engineers agreed to extend guard railings and to reduce the amount of taxi ranks in the area to help prevent motorist driving on the pavement. However still nothing has been done and in fact due to a taxi rank poll being removed it is even easier to get onto the pavement. Why this Council Administration take so long even to carry out simple improvements is a real mystery. I will keep on to them about this issue however.
Posted by Keith Linnecor at 05:57