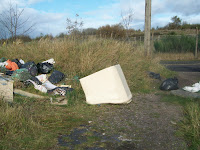 Fly tipping like this in Booths Lane will only get worse next year due to the Councils cuts in the Bulky Waste Service.


Due to cuts being made by the current Council Administration, from January you will only be able to request up to 3 Bulky item collections free of Charge in one year. It you would like have between 3 and 6 you will have to pay £15 and for more than 6 it will cost you £60 for each collection. We are told other author ties charge more for the same service but we are a bigger authority and residents in Oscott relate to this service when they pay there council tax.
Also as can be seen from Booths Lane residents from other authorities are not afraid to dump rubbish in Oscott and this fly tipping will only get worse when Birmingham residents are forced to pay.
one hundred and fifty thousand residents use this service up to 6 times a year and only a hand full abuse 30 times as it as claimed.
Sadly as many people have foreseen we are now feeling the long awaited for cuts in services.

While I accept a small number of residents may abuse the current free system of bulk collections but this draconian response is very unwelcome and when this is added to the reduction in the Ward Environmental officer time allowed in a ward it will result in an increase in fly tipping.
Posted by Keith Linnecor at 17:08

To true keith not to mention that this will increase the amount of Fly tipping that take place across the City adding to what is already a major problem
Affordability will also play a major role for the unemployed and our seir citizens Once again hitting the most vuunerable .