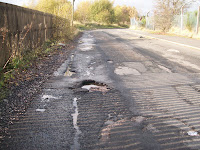 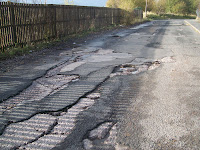 The Birmingham City Council have now decided not even to put warning signs at each end of the Non adopted section of Booths Lane depite its clearly dangerous condition.
Some years ago at my request when the Booths Lane was in poor condition they agreed to put up uneven carriage way road signs.
Now the condition of the carriage way has, despite warnings from Councillor Dring and myself, has been allowed to deteriorate to a dangerous condition.
This being the case I have been calling for warning signs to inform those users of especially those on two wheels and not knowing the area, of the potential danger of this part of Booths Lane.
With the current bad weather these signs are even more urgently needed.
Also because of the lack of action by the Birmingham City Council and the Sandwell City Council there are regular accidents on at the near by Queslett Road Nova Court junction area and the Police are having to divert traffic onto the potentially dangerous Booths Lane. This means more drivers who are not aware of the condition of the unadopted section of Booths Lane may have accident.
THE COUNCIL SHOULD REPAIR THE DAMAGED CARRIAGE WAY AND PASS ON THE BILL TO THE OWNER OF THE LAND OR ADOPT THE ROAD THEM SELVES. THE VERY LEAST THEY SHOULD DO IS PUT UP WARNING SIGNS. THEY ARE RESPOSIBLE FOR THE SAFETY OF THOSE DRIVING THROUGH OSCOTT.
Posted by Keith Linnecor at 18:16

why dont you put speed bumps on it like you try to do every where else.If you had your way we'd never get the car out of 2nd gear.Some of us have to work for a living and need to get from A to B in a reasonable time.We all cant poodle around at 20MPH watching the world go by.Unfortunately we all cant work for the council

Yea good shout anon.It must be great to be a councillor and wander around the estate at your leisure.Its not the speed of the traffic that causes accidents its pedestrians who dont look where they are going.You cant prevent accidents thats why they are accidents

Thank you for finding the time to read and reply to my blog over the Christmas Period.
I hope you your loved ones had a good time.

However I think you may be mistaking me for another Councillor?
I very rarely if ever call for speed humps or ramps to be introduced to a road. (Check my blog for example!)
I do ask for the Transportation department to look at what sensible road safety measures can be introduced when there is a problem rat road, for example.
Speed indicators and signage are a couple of possibilities in some locations. I do agree that pedestrians can at times be their own worst enemy when it comes to road accidents. Perhaps the old green cross code should be taught again in our schools?

Have a Happy New year

I dont think Ive got you mixed up.Are'nt you the person responsible for those stupid speed bumps in Shady Lane.I'm sure that they were proposed by you.A friend of mine hit a pot hole in one and caused £600 pounds worth of damage to his suspension.

As I recall following a number of complaints about speeding I originally suggested some form of simple chicane or road lay out change and signage to be introduced. This was rejected by all those present a public meeting at the Ash grove Centre who demanded speed humps.
. Fortunately the small style road humps were introduced rather than the full sized humps and that was the finale compromise agreed.

You will have noticed very few other road humps have been introduced to the Oscott area. There are a number of other road safety measures which can be used.

Many thanks for your continued interest in the subject and if you would like to discuss it further in depth please pop in to one of my Saturday Surgeries.

When and where is your next surgery I will definately come and debate this issue with you.I hope you can collate some relevant facts and figures to back up your previous statements

My next surgery is on Saturday 9th January at the 610 Comunity Centre Kingstanding Road (10.30am) I look forward to seeing you there.

I hope Anon turns up at your surgery but i doubt he will.
You are the only Councillor I know who replies on a blog.

I will show up and hope to see you there as well J!Thats if its got any thing to do with you!

I hope you will both come along the more the merrier. If any one else wants to come if you let me know I will try and lay on a cup of tea to help keep the cold out.

And yes J? I do like to reply to comments made on my blog if I can thanks for the comment.