PATROLING THE BANDYWOOD ESTATE WITH THE POLICE NEIGHBOURHOOD TASKING GROUP 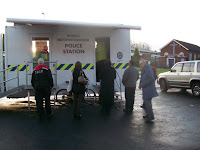 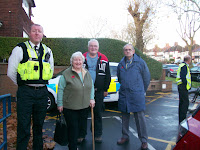 I spent a damp afternoon yesterday doing a walk about as part of the Police Neighbourhood Tasking Group. The idea was to speak to local residents on the Bandywood estate and trying to see if we could resolve problems for them. Taking part as members of the NTG as well as myself were were Local community Group Representatives, Council officers and the Police.
There was also a Police caravan on site for much of the afternoon.
A number of issues came up including fly tipping and problems with anti social behaviour. There was certainly one result a youngster taking drugs was spotted and dealt with.
Back at the base a number of issues were raised. I brought up the issue of parking near the James Watt College and various speeding issues. The Police were able to inform us that following an increase in burglaries recently the Police has a crack down and a number of people were arrested.
If you would like more information about the NTG please ring ) 0121 464 1869
Posted by Keith Linnecor at 08:31