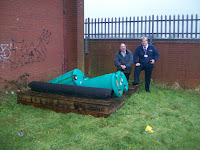 I would like to thank Mike Garvey (Great Barr Leisure Centre Manager) and many of his staff who in their own time are building a wild life island refuge for the lake in the Queslett Nature Reserve.

I have to admit when I suggested the island was what the lake needed for its wild life I never thought Mr Garvey and his volunteer group would be able to do as well as they have.

The island will float in the middle of the lake in the Quslett nature reserve after being weighed down. The Parks department have been very helpful in the guidance they have given and the friends of the Queslett Nature Reserve have also been very supportive.

It is hoped that the new island will be ready to be "launched" in a matter of weeks?

IF YOU WOULD LIKE TO KNOW MORE ABOUT THE fRIENDS OF THE QUESLETT NATURE rESERVE PLEASE RING 360 6486
Posted by Keith Linnecor at 08:33