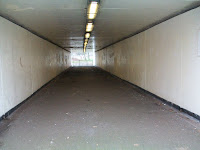 The Birmingham City Council Council are considering having a mural in the foot way tunnel under the M6 motor way at the end of Bowman Road (where it leads to Turnbury Park in the Perry Barr Ward)
Residents are split over whether this is a good idea.

I have been made aware a number of resident living in Perry Barr are in favour of having this tunnel lined with murals drawn by local youngsters. Against this there are a number of resident living in close by in Bowman Road who are opposed to this given the problems there have been with vandalism and graffiti in the tunnel in the past. The Transportation are also unhappy given they have used special paint in the tunnel to deter graffiti.
I am as usual interested in hearing the views of local residents and I am already working with the Oscott Residents Association to identify views on this issue. However if you would like to give me you opinion please give me a ring on 360 6486 and let me know.

(This tunnel is also know as Forgers Walk)
Posted by Keith Linnecor at 13:10