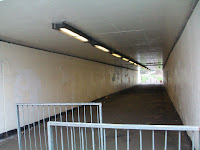 At a recent Oscott Ward Committee meeting Chaired by Barbara Dring Residents from the Bowman Road area handed in a petition strongly objecting to the proposal to have a mural painted in the near by Forgers Walk tunnel. They feel if would make the well lite and bright tunnel darker, attract anti social behavior and will mean even more litter in the tunnel. They would like any Mural/ Graffiti walls being located in near by Leisure Centres
They further believe the current measures which they have fought for re having the tunnel walls painted with bright anti graffiti paint on a regular bases helps keep the tunnel clean.

On the other hand a number of residents in Perry Barr are actively in favour of having a mural in the tunnel which would be drawn by local youngsters and helping to involve these youngsters in doing something useful. Funding has been found by some of these residents to do this work and they are being advised by project workers.

The owners of the tunnel, the Highways Agency were at first against the idea because of issues like the anti graffiti paint they use from time to time but have now changed their mind.

The Council now have the petition and will be considering it.