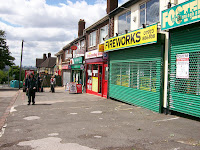 The reaction to the save Greenholm Post office campaign has been overwhelming.
Councillor Barbara Dring and myself have received letters and cards galore from residents who are extremely anxious, regarding the future of the Greenholm Post Office, Kingstanding Road.
It is also very pleasing, that residents understand that Barbara and I are trying to steer clear of the petty politics which could surround this issue and are doing what we can to get the Post Office to re consider this closure.
We in fact would welcome Councillors from other parties getting involved and hopefully putting politics aside for a while on behalf of residents. If they can, it would be far more effective.
It is also time people realised how much money the government have put into the Post Office over the years and it is the Post Office who should show a Social responsibility. They need to consider, the effect their proposed closure of this Post Office, could have on the large amount of elderly residents in this area.
While some Post offices are genuinely in decline and may be not sustainable? it is certainly the case, that the one near Greenholm Road is not one of these. They have in fact improved there services to the elderly and deserve all our support.
It is also important that the Birmingham City Council and other large institutions do their bit to help the Post Office and return some of their custom to the Post office, much of which has been given to other companies.
Posted by Keith Linnecor at 19:59

You are rights it is about time the Council put some money into the Post Office.

I think the way the Tories are behaving over this one is very childish. Labour is the only party that has shown decent commitment to the Post Office over the years. The Tories whould have flogged the lot off years ago.

Sorry but you can't trust a Tory.

Keep up the battle and dont give up.