DANGEROUS CONIFERS TO BE REMOVED AT LAST 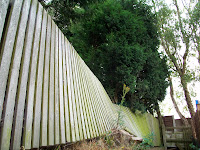 There has been an issue regarding overgrown conifer trees on the area of land between the Cot Leigh Grove estate and the new development off Kings Road. Concerns over the years many concerns have been expressed regarding the safety of the trees and their impact on the adjoining retaining wall, which in parts has had to be braced by timber supports for years.

This area of land is believed to be a works access route used by the former commercial occupants of the site, but has not been incorporated into the new ‘Wimpey’ development. Both Councillor Barbara Dring and I have had extensive enquiries made regarding ownership and responsibility for this land and no firm conclusion has been made from these investigations.

However I am pleased to see that it has now been determined that, in the absence of a responsible owner being identified, the conifers should be removed in an effort to protect the integrity of the retaining wall, by the Birmingham City Council Housing department.
Consequently an order has been placed to commence the necessary works to take out all the trees along the ‘access route’ and the appointed contractors advise us that the job should be completed by the second week in October 2010.
Having been in constant touch with residents and the Housing department for many years about this matter and given part of the wall is in a damaged and dangerous state this can not come soon enough for me
Posted by Keith Linnecor at 19:45