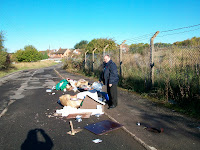 I was right yesterday when I said that it was only a question of time before Booths Lane will be fly tipped again. It has over night. It is time CCTV was re introduced to the area and the Council and the land owners took firm action to deal with this problem.

The over night tipping has obviously been carried out by professionals and along with other rubbish cash registers, lighting tubes, trays, glass and other objects make it clear that a pub/ restaurant has paid someone to get rid of their rubbish. Booths lane was actually blocked for a time by this rubbish.
Along with Council officers I helped search for evidence of the owners of the rubbish and have managed to get the rubbish removed.
If you see anyone fly tipping please report it to 303 9900 and lets work together to stop it.
Posted by Keith Linnecor at 07:49