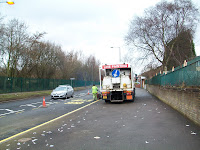 The long awaited road safety measures to be put in place on the Aldridge road near the Great Barr Schools has now started. Unfortunately with a hic up or 2.
Some resident living near the school were not consulted about the finale parking restrictions and I had to spend the day getting them adjusted in favour of the residents.
However the scheme itself appears to have received universal approval.
One further issue however will be how this scheme and the similar one in Sandy Lane, effects residents in Malthouse Lane near by. I have received a written promises that the situation in Malthouse lane will be monitored in the future.
Posted by Keith Linnecor at 08:57