OSCOTTS STREETS IMPROVEMENTS CAN BE BETTER 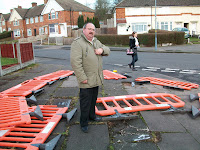 As you may well know the Birmingham City Council have awarded a private contractor called Amey a long lease to upgrade our roads across Birmingham. This is partly due to the policies of the last Government, allowing more funding to become available and means the back log of various kinds of work the Council has allowed to build up over the years can be cleared.
That is the good news.
However I must say the levels of complaints I am beginning to receive about some of the work being done in Oscott is of concern. (although much of the work done has been done to a good standard)
For example the resurfacing of the carriage ways in Birdbrook Road and Kings Road. Sand bags (I have been told an elderly resident tripped over one such bag and was quite shaken) and road signs were left for weeks on pavements following the work being completed.
Yellow lines and other marking have still to be put back in place and in some places damage done to pavements by heavy plant machinery has left pavements unsafe.
Following my intervention on behalf of residents the Council has had to agree to carry out resurfacing work on the carriage way in Templeton Road. This was after contractor left it in an unsatisfactory way.
Both Councillor Dring and I while welcoming the Council finally getting some of the works done to our streets are keeping an eye on the standards of works being carried out. If you are aware of any poor work that has been carried out of signs and so on being left abandoned by the contractors please give me a ring on 360 6486.
Posted by Keith Linnecor at 21:08