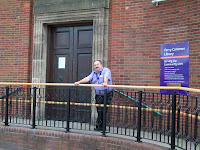 Sadly the 2 libraries in Oscott are still under threat of closure due to draconian buget cuts in funding by the Coalition City Council.
Constituencies like Perry Barr (which Oscott is in) are being forced to make deeper and deeper cuts due to the Councils policies.
Both Kingstanding and Perry common Library have already had to reduce their opening day by one recently and now we are all dreading Council funding announcements in April.
Both Councillor Barbara Dring will be fighting for Oscott Libraries to be saved. I would also support other Labour and yes Liberal Councillors in the constituency who want to keep libraries open. I think on this isue we are as one?
Posted by Keith Linnecor at 22:01