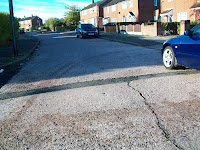 Unlike many it would appear I have not forgotten that many of the roads in Oscott with Concrete carriage ways are in urgent need of being resufacing or major repair.

While thanks to pressure from local Councillors and Local residents, the Council have been using funding given to them by the last government, to repair and upgrade many of our roads.

However with the exceptions of Templeton Road which I had to fight tooth and nail for and Dunedin Road, many concrete roads in Oscott have just had minor repairs done on their carriage ways.

Along with Councillor Barbara Dring I will attempting to get these roads looked at again in the future and can assure you I will not just be trying to get things done before an election.
As far as I am concerned this is a year around on going problem and I will continue try to get the Higways department and the Contractor to take action.

You may not see the following in every leaflet put out with my name on it, but the following roads are some I am asking senior Councillor officers to take action on.

Election time or not I will keep the flag flying for residents in these and other roads.
Posted by Keith Linnecor at 09:23