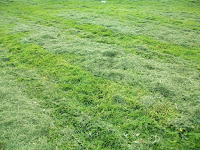 It is sad to see due to the huge cuts it faces  the Leisure Services are having to face up to many issues.

Currently a small pot of funding which was found last year has eased the grass cutting issue on the Glenmead site and there is a possibility of some sponsor ship in the future.

However the Aldridge Recreation Ground is now only having its top section cut on a regular basis. This is enough to keep pitches in use for foot ball clubs. As far as I am aware there has not been enough enquires for pitches by clubs which would lead to the need for more grass cutting of the bottom section of the site? Hopefully this may change.?

Sadly however the bottom section is not been cut and had been left to grow. This has an advantage in the long run by easing the pressure on the soil from cutting and use and wild life is benefiting  from the situation.

I have had complaints from some dog walkers who have issues with picking up their dogs mess when the dogs are in the longer grass.?
Firebreaks are in place which may help those wishing to use the bottom section for exercise.

However Councillor Barbara Dring and I have been asking for this section of the field to be cut and have been told it will be later in the year and we will be urging this take place.

I have also been recently been assured that in a number of cases to help joggers and walkers, the way fire breakes are cut will be a more imaginative in order that more enjoyment of the sites can be obtained.
Posted by Keith Linnecor at 14:54