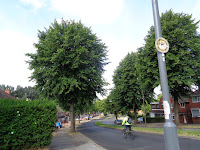 Following the Oscott Tree campaign which I am leading (many thanks to Councillor Barbara Dring and Councillor Tristan Chatfield for their unstinting support) it has been announced that Thornbridge Avenue is now to have its trees pruned.

The battle goes on however we want to see the campaigns aims better tree pruning and a sensible tree replacement take place across the Oscott Ward.

Amey Highways have as a result been carrying out a comprehensive survey of all the trees in the ward. An update of this will happen in the later this year.

Already a number of deceased trees have been spotted and they are being removed.

This is not a quick simplistic quick fit traditional approach and it is hoped that in time the whole ward will benefit.

There is also to be a scrutiny report on the issue of tree pruning.

The battle goes on.
Posted by Keith Linnecor at 10:43