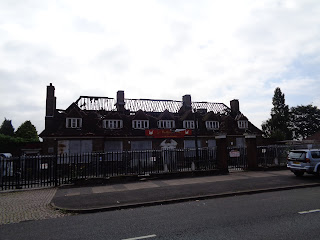 On behalf Of Oscott and Kingstanding Residents I have raised the condition of the former Hare and Hounds  public house on the Kingstanding Road at this weeks Planning Committee.

As you may recall a planning application calling for housing to be put on the site was turned down by the Planning Committee ( following a site meeting which I called for, where the issue could be discussed with residents.) Many residents were very unhappy with the proposal put forward, access being a major concern.

Sadly the building then court fire some time later leaving the building looking a real mess. This has gone on for far to long.

With the help of Oscott Councillor Barbara Dring I am pressing for the developers to be encouraged to come forward with new proposals or at least demolish or rectify the state of the building.
Posted by Keith Linnecor at 11:22