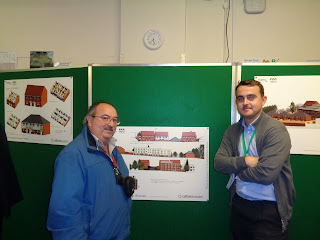 I was pleased today to be able to pop into the 610 Community Centre today to see the new plans for the development of the Old Hare and Hounds Public House which was burnt down last year.

As some may remember following my request for a Planning Committee visit to the site to look at previous proposals re using Rushden Croft as and entrance the previous plans were tuned down.
New plans show an entrance via Kingstanding Road. It is intended that there will be 34 properties including some with 4 bedrooms. There will be flats and houses.

Having spoken to a number of residents asking for their views it is clear parking spaces is still an issue.

Waterloo Housing and Keep Moat were on hand to discus issues raised by local residents who came along to see the display.

Councillor Barbara and myself will keep a watching brief on the situation on behalf of Oscott residents who over look the site.

You have until 8pm tonight to see the display. You can make your comments to the developers or at a later stage on line.
Posted by Keith Linnecor at 17:54