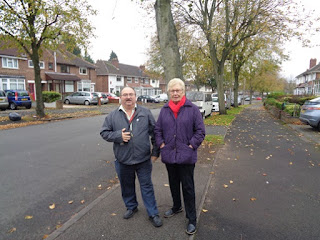 As part of my campaign to try and get Amey Highways to look again at their tree pruning program and to start replacing some of the huge numbers of old over grown trees in the Oscott Ward Councillor Barbara Dring and I have visited a number of roads.

Amey Highways agreed to survey all the street trees in Oscott and as a result dozens of trees which were found to be deceased have or will be removed and replaced, which is a start.

Both Barbara and I are intending to continue with this campaign and the next step will be Amey Highways attending the Oscott Residents Committee meeting of the 26th of October at the 610 Community Centre, starting at 7pm. (To be Chaired by Barbara.) Amey Highways will be giving us their current update and will listen to residents concerns about trees.

This meeting is open to all Oscott residents.
Posted by Keith Linnecor at 07:19