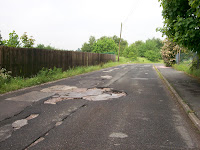 The condition of the carriage way on the un- adopted stretch of Booths Lane is simply a disgrace.
The amount of pot holes in this carriage way mean an accident is just waiting to happen.
I would have thought, that as the developer had won his argument and got his planning permission, to develope the site along side the un- adopted part of Booths Lane, he would have ensured the carriage way was made safe. This has still not happened and he needs to take action as soon as possible.
Posted by Keith Linnecor at 14:50

This road is discusting the owner should cough up and put it right.
There is always rubbish dumped on it as well.

This road is the worst in Birmingham.