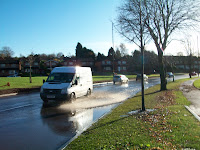 Due to the very bad recent weather there is flooding on the Aldridge road near the Metropolitan James Watt Campus. I have called out the Councils emergency services as cars are being forced to drive on the wrong side of the road.
In the mean time vehicles need to slow down.
I have also yet again called on the Highways department to inspect drains in the area as much as possible as blocked drains can make flooding even worse and I have also called on the Street Cleaning department to clear leaves from our streets as these are starting to block drains in some cases.
Posted by Keith Linnecor at 13:16