A PACKED ROOM HEARS OF SOME PROGRESS IN OSCOTTS TREE CAMPAIN 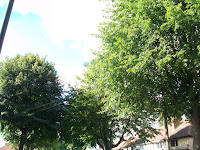 At a packed meeting of the Oscott Ward Committee residents heard from Senior Amey Highways and Council officers that at last, following years of pressure a serious phased approach for the removal and replacement of some of the larger trees in the ward, is being put together.

Residents were told work to investigate the thinning trees where they are most dense and causing the most issues  with would be looked at first following a number of petitions I have submitted on behalf of residents. Officers also announced although trees would not be subject to over pruning many in the same effected roads would at least be looked at again.

This is certainly some progress but more is needed and along with my ward Colleagues Councillor Tristan Chatfield and Barbara Dring I will be continuing to keep the Pressure on Amey to do as they say.

Khalid Mahmood MP has also assured me he will be meeting with senior Council officials to keep the momentum of the tree campaign for Oscott I have started moving.. He will also be taking the matter of the standards of tree pruning up with the Government department responsible.

I explained at the meting all the residents who have complained to me individually regarding tree problems have had their complaints forwarded to Amey Highways for further investigation and that along with my fellow Councillors, on request we will be collecting more names from different roads with a view to presenting further petitions. I have already presented over a dozen petitions to the Council on the subject of trees and I will be helping my colleagues Councillor Chatfield and Barbara Dring collect even more names over the next few weeks.

I have also made it quite clear I am in favour of trees being in our streets but they must be of a suitable size and variety. I have also insisted that trees removed must be replaced in a suitable location.

I would like to thank all those residents and officers who attended this meeting and Councillor Barbara Dring who did such a good job chairing the meeting.
We hope to organise a further meeting sometime in the new year. In the mean time if you have any issues relating to trees please Email me Keith.Linnecor@birmingham.gov.uk or phone me (messages) on 303 2039.
Posted by Keith Linnecor at 04:24