As many Oscott residents will be aware due to huge cuts in funding to the West midlands Police force by the Government, many changes are having to be made which will effect the Oscott area.

We have already seen the start of the effects of these cuts by the closure of the Kingstanding Police Station to the public and now it looks like their Perry Barr station may go to?

There are clearly going to be reductions in the numbers of local officers and this will become more noticeable as time goes by. We have already seen some types of crime rise for the first time in some years.
Our Local Police team despite less funding have been doing a great job!

bearing all this in mind Oscott residents need to help them selves and act together for their own security.
For example in Oscott there is a Neighbourhood Police Initiative and a number of Neighbourhood Watch schemes that residents can join.

Residents need to keep there eyes and ears open keep an eye on not only their own houses and cars but also neighbours.

Some simple tips are.

Leave a light on when you go out.
Lock all windows and doors when you go out (and when you go to bed.)
Lock sheds gates and rear access ways
Never let anyone in your house without checking their ID.
Keep your car doors locked and do not leave items or cash on display.
Keep an eye on your neighbours property as well as your own.
Avoid using dark alleyways at night.
Keep an eye on your purse or wallet when yo go shopping.
If in doubt sit down stairs on a double Decker bus. ( report anti social behaviour to the Safer Travel team)
Post code your property including Wheelie bins.
Keep an eye on elderly neighbours and remember these tips are for everyone not just the elderly.
When reporting a non emergency use to Police 101 number to help free up the emergency 999 number.
In the case of any emergency ( when something is happening) ring 999.

If you have a concern you would like me to raise with the Police Email me on Keith.Linnecor@birmingham.gov.uk. 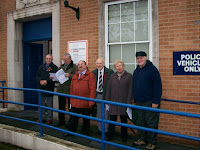 I meet with the Police and local community leaders regularly as part of the Oscott Police Neighbourhood Tasking Group to raise general Policing concerns in the area.