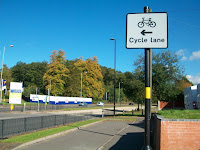 As some one trying to improve and create more cycling routes in Oscott and the North Birmingham area I was pleased to support in the Birmingham City Council Planning Committee, improved cycling paths on the common land between Perry Common Road and Witton Lodge Road. The new paths being laid down on this well known piece of land I am sure will be well used by cyclist from across the area.
In Oscott I am still trying to promote improved cycling lanes and joint use paths. I have for example asked for the Kingstanding Road and Kings Road to be considered for improved cycling management.
Booths Lane ( the new development will result in improved cycle paths in the long term)  and it is hoped something may be done in the Queslett Nature reserve to help cyclists use it in the future.
Posted by Keith Linnecor at 20:17