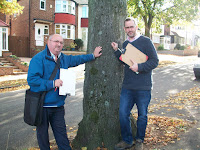 The campaign to have the large forest type trees in Oscott either pruned more heavily or when they are to close together causing issues of poor light and so on replaced with more suitable varieties goes on.

I am certainly not in favour of getting rid of all our street trees as they clearly have benefits to all of use but I am and have been for years calling on the Council and Amey Highways to introduce a sensible tree removal program which operates in a phased way over a reasonable time to replace over grown and in many cases elderly 60 year old large trees. Many of these trees cause problems such as falling branches, are to close together causing light issues for residents ,uneven pavements due to having roots which are far to large and so on.

Clearly they should not be and financially cannot be all be removed overnight but over a period of time the aim should be to replace these trees which in many cases were planted just before of after the second world war, with trees more suitable for our streets.

Following the start of my campaign Amey have agreed to look again into thinning some of the trees in roads where I have petitioned.

With this in mind along with my colleagues Councillors Barbara Dring and Tristan Chatfield (as well as local residents) I am continuing to gather names of Oscott residents for petitions calling for better tree maintenance in the Oscott ward. 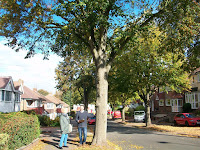 This is not a short term, forgotten tomorrow campaign but a long term effort and I would like to thank all those Oscott residents who are helping with  petitions, those who are signing them and those who are letting me know what problems with street trees they have.