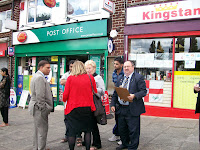 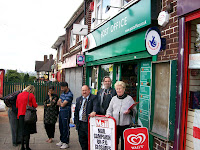 It has been announced that the Post Office are set to close the Greenholm Post Office.
This is a very regretful action in my view and I will be doing what I can to get the Post Office to change its mind.
It will be a real uphill battle, but I have already joined forces with Khalid Mahmood Mp, fellow Oscott Councillor, Barbara Dring, other Local residents and the Birmingham Mail to campaign against Post office closures in Oscott.
Many pensioners still rely on the service the Greenholm Post office gives and there is a long way for them to travel to the next Post Office. The Shops near by will also have their Trade effected.
I hope other Councillors will get involved and join our campaign.
If you would like to join the campaign please give me a ring 360 6486
Posted by Keith Linnecor at 13:38

Whats the odds Green will read your blog and get interested in the subject?

How on earth do you have the cheek to campaign against this?
It is your Labour Government that is conducting this vicious closure of our Post Offices.
Also when you had the chance to vote last September to try and stop the closures, how did you vote? You voted with the rest of your Labour cronies to continue the closures!

I love it when you wind up a Tory

Keep up the good work both with the campaign for the Post Offices and winding up the Tories.

keep it up for the residents

Labour hypocrisy at its very best!

Why don't you just defect Linnecor? You know you want too!

Keep up the good work Keith we know who is doing the work around here.

Do you know I do not vote politacally but I always vote for you.

Well done keep up the pressure.

Do what you can to save the Post office in Kingstanding Road and dont worry about the whingers they do nothing anyway. The more they moan the more support you get.

Whats all the fuss we dont need post offices, use the bank

ep up the good work.
Good to see others are joining in at last.