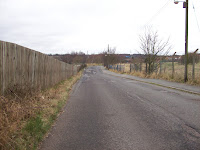 A number of residents have been on to me recently' asking when the un-adopted carriage way in Booths Lane is, going to be replaced as promised, as it is in a very poor condition?.
When planning permission was granted for housing development in Booths Lane, it was agreed that as part of it, there would be a new road lay out for Booths Lane. It was certainly one of the main selling points by the developers, to appease local residents. Presumably it will be done soon, to prevent there being egg on the face of the developers and their supporters?.
I certainly understand, how most people never wanted this development, as it is thought to be inappropriate and not needed. I do think however in fairness, they should be given a little more time to replace the carriage way, before people become too critical. Some repair work needs doing urgently right now and I have asked the Transportation department to look into this.
Posted by Keith Linnecor at 07:37