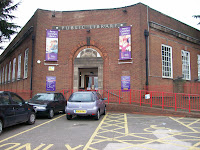 I attended a meeting of the Kingstanding Pensioners Convention today and was pleased to see the K.P.C, really seems to be taking off under the Chairmanship of Ken Smith.
There were a number of interesting issues on the agenda, including a report about a Pensioners Parliament in Blackpool, attended by delegates from the K.P.C. It would appear that a number of Westminster MPs were given a well deserved roasting, when they attended this Parliament.
There are now 11 million pensioners and they need to have their voices heard by politicians from all parties.

Issues of concern at the meeting today also included, the return to the index linked to average earning, pension. This was of great interest to those at the meeting and it was good to see a number of "younger" pensioners seem to be taking up the cudgel for pensioners rights. Many of those present, while welcoming this link being reintroduced in 2012, following the break in the link, by the last Concervative government, would like to see it reintroduced much earlier.
Heating bills were another issue of concern. Age Concern stated they can can help with advice on how to find cheaper options, by changing suppliers for example and this can certainly make a difference! (their number is 358 0309)

A number of those at the meeting also indicated they would like to see more of Khalid Mahmood MP, to discuss important issues with him and he agreed to arrange a meeting with the KPC, when I passed on their message.

The K.P.C meet on the 3rd Monday in the month at Perry Common Libary (11am.)
Posted by Keith Linnecor at 19:31

It is good to see someone take an interest in the elderly.
For the record it was Thatcher goverment who broke the link with average earning and started robbing the pentioners.