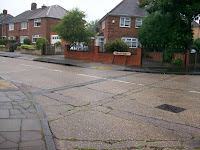 I have been informed that the Cabinet Member for Transportation has made a tour of the roads in Oscott with Concrete carriageways.
I am sure, if when he spoke to local residents, they would have reminded him that when he last visited, just before the local elections in 2006, he was very concerned about the problems they had.
Problems such as, the very poor state of the concrete carriage ways, which need urgent repair and eventual replacement. The problems caused by speeding traffic and the vibrations caused by heavy vehicles and so on.
I hope this time rather than just being concerned about these problems, he can get his department to take action, as Councillor Dring and I have continued to request for some years.
Just in case I will continue to remind his department on behalf of residents.
Posted by Keith Linnecor at 08:13

Hi Keith
Have you seen the rubbish Green is putting out. (I an true Blueby the way) Why on earth did my side pick this clown.?