THE SCOURGE OF THE FLY TIPPER IN OSCOTT 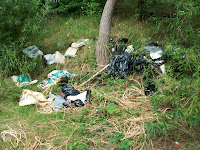 Fly tipping is one not only anti social but it can be dangerous to peoples health.
Sadly the scourge of the fly tipper is always with us and sadly the penalties never seem to be a big enough deterrent.
Dumped bags of industrial and domestic waste appear from time not only on our open spaces but in residents rear access ways.
Some times rubbish even appears in rear access ways which are gated which indicates it may be a local resident or in some cases shop keeper doing the dumping. That said it you do have gates it is wise to keep them locked other wise you may get much more fly tipping going on in your rear access way.

Brian Brookes and his NPI Team do occasionally put out letters reminding residents not to fly tip and to lock their rear access way to prevent fly tipping.
The Friends of the Queslett Nature Reserve carry out clean ups not only on the reserve but from time to time on the Aldridge Road Recreation Ground and other places (the Grot Spot Squad) and I am often having to report fly tipping to try and get the rubbish removed.

If you want to report fly tipping the number to ring is 303 1112 (if you do see rubbish being dumped from a vehicle try and take the registration number but do not put your self at risk dong so.)
Posted by Keith Linnecor at 05:26