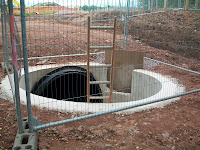 Following a number of rumours regarding the Booths Lane development I have been to see for myself with senior officers from Cameron Homes what is happening on site.

The drainage works are well underway and are very impressive. They include a overspill drain from the lake on the Queslett Nature Reserve along with other storm and sewage pipe works.

The road is gradually being laid out and it is hoped to start putting down Tarmac sometime next month. However there still needs to be a lot done to get the road up to standard for example street lamps and pavements. With this in mind it is not yet known when the road will reopen but  I have again been assured it will be..

The house builders may start work on site in a couple of months.?

There will be some minor changes in the foot path lay out including extending a path into the reserve with a new gate to be supplies by the developer. Some fencing on the reserve will be removed on a very temporary basis to allow work to proceed more quickly. (it will be put back.) .There is still a lot of work to be done on levelling gradients for landscaping work. There is a lot of care being taken to remove unsuitable soil from the site.

The boundary wall Caddick Road side is coming on well and fencing will be put on the top of the wall for added security.
Posted by Keith Linnecor at 17:05