YOU ARE YOUR PUBLIC TRANSPORT 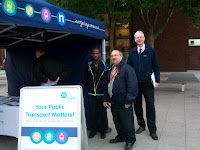 You are your public Transport are events held in each of the West Midlands Districts where public Transport users can come along and have your say.
For example there was an even yesterday in Walsall near the bus station which I attended. Dozens of public Transport users came along to discuss issues with advisers from Centro and NX. A number of complaints were collected for possible action and a lot of advice was given out.
There will be a Birmingham YAYPT event in Birmingham in October between 1 and 6 pm. I will report on the venue and day nearer the time.
In the meantime if you have a concern about Public Transport give Centro a ring on 0121 214 7214
Posted by Keith Linnecor at 06:38