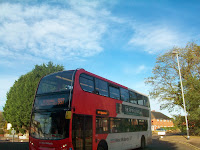 I have a agreed to become a Bus Chamion on behalf of the ITA (Centro)
Given a number of complaints and issues I constantly hear about regarding the 997 Walsall to Birmingham route (including a large chunk of the Oscott Ward) I have chosen the 997 route to champion.
I think I will have my work cut out but will give it a go.
I will certainly be listening to 997 users and trying to communicate with the Private bus company NX who run the service as well as Centro.


If you have any complains or even praise regarding the 997 bus route if you email me Keith.Linnecor@yahoo.co.uk  and I will pass on your comments to the NX Bus company and Centro.

I can not promise to improve the service but I can at least try and ensure complaints are dealt with and to try and resolve issues where possible.As part of being a bus champion I will be meeting with the Route Manager.

As a regular bus user my self I will continue to pass on first hand complaints about bus services generally and the complaints I receive from other bus users and residents.
Posted by Keith Linnecor at 07:25