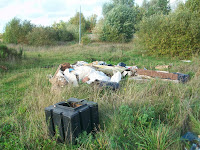 I am working to try and engage various authorities, the Police, Fire brigade,the private sector and the Council as well as Oscott residents groups in the battle against fly tipping.

Everyone can do there bit to prevent or report fly tipping in Oscott. For example I have asked the Police to be more vigilant when out on patrol. I have asked the Council to respond as quickly as possible to reports of fly tipping and to enforce the bye laws more vigorously.
Resident groups can help by informing their members about the problem and make as many people as possible aware of the problem and to use the Council telephone number 303 1112. If you note a registration number for example of a vehicle whose owner is fly tipping pass it on to the Council.
We all need to work together to stop fly tipping
Posted by Keith Linnecor at 19:22