RECYLING BOXES NEED TO BE COLLECTED ON TIME 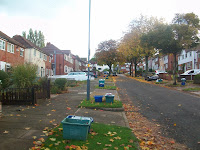 Councillor Barbara Dring and myself have for some time been receiving complaints that recycling boxes in the Corbridge Avenue, Rodlington Avenue and Sandwood drive area have not been collected on time some some time.
Having had discussions with the local Salvage department it would apear the problem is the vehicle used for collecting boxes from smaller roads like these has broken down and new parts had to be ordered.

There were also problems do to demand in using a similar vehicle from else where.
The manager involved has assured me he is doing his best to resolve the situation as soon as possible and these roads have been dealt with.
Posted by Keith Linnecor at 06:35